Written and illustrated by Yuki Tabata, Black Clover has been extremely popular in the US or even around the world as a manga series. However, Black Clover isn’t available on all streaming platforms and if you expect to stream it online, you should know where and how.

Black Clover is a Japanese anime series written and illustrated by Yuki Tabata, telling a story where magic is normal and common for everyone. The center character of this story is a boy named Asta who expected to be the Wizard King but had no magic at all. Black Clover anime series covers 170 episodes in 4 seasons in all and got instantly popular since its first release online.

Where and How to Stream Black Clover Anime Series Available Online?

Unfortunately, the Black Clover anime series isn’t available on the leading streaming platforms like Netflix, HBO Max, and Disney+. Therefore, if you’ve already purchased premium on the platforms mentioned above, that won’t work at all when it comes to the Black Clover series.

Then, where and how to stream the Black Clover series online, then? Here comes the answer.

Among all the solutions to online stream the Black Clover anime series, Crunchyroll is the BEST for it’s really FREE and Complete.

Black Clover anime series is available on Crunchyroll here and all the episodes are reachable without any charge.

No matter which device is used to stream the Black Clover series, it’s totally free of charge.

However, the only disadvantage of Crunchyroll is that ad videos are required to be seen before streaming each episode. Nevertheless, it doesn’t take long. After all, compared with ad videos, being free provides a reason not to be missed out.

Black Clover is also available on Funimation although that’s partial.

Funimation provides the first 26 Episodes of the Black Clover anime series and if you want to stream the following ones, you should subscribe. The plans with different prices are shown below and each of them can be tried without any charge even though it won’t last long.

If you’re a big fan of anime, it’s worthwhile to subscribe to Funimation. If you just want to stream Black Clover, however, it’s unnecessary.

Black Clover is also available on Hulu and if you’ve subscribed to it, you are able to stream the Black Clover anime series for free. However, some Hulu users report content missing issues and it’s strongly suggested to check the completion of the whole series.

Outside the US, How to Still Stream Black Clover Online

A VPN provides the following benefits for online streaming.

A step-by-step guide to streaming Black Clover online with a VPN is provided below with SkyVPN as an example.

Step 1. Download SkyVPN and install it on your device, iOS or Android, desktop or mobile.

Step 2. Create an account and purchase a premium plan.

Step 3. Choose the US server and tap the “Connect” button.

Then, you’ll be able to stream the Black Clover anime series even if you stay outside the US.

Get a VPN for Free Now 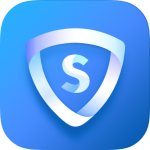